The New Mexico Pageant of Bands panel of marching band adjudicators (judges) for the 2017 competition consists of:

Mr. Auster currently resides in Thousand Oaks, CA. He has extensive experience in instruction and adjudication, including Drum Corps International, winter color guard, winter percussion and fall marching band. His teaching experience includes the Hawthorne Caballeros, the New York Skyliners, the Air Force Academy Drum and Bugle Corps and the Denver Blue Knights. In 1987, Mr. Auster was one of the instructors for the Super Bowl XXI halftime show in Pasadena, CA. Mr. Auster retired from the AT&T Company and now works as a Docent at the Ronald Reagan Presidential Library in Simi Valley, CA. Last year he was one of the adjudicators for the SCSBOA State finals. His current position is in publicity/public relations for the WGASC .

is an associate professor of music education at the Moores School of Music, University of Houston.  He teaches instrumental conducting, brass teaching methods, secondary music education, and is a student teaching supervisor.  For 16 years, he previously served as the University of Houston Director of Bands, leading the Cougar Marching Band, Symphonic Band, and Cougar Brass.  Bands under his direction received international acclaim with performances in Japan, Mexico, France, and Ireland.  Prior to joining the Moores School faculty in 1984, Professor Mayes was Director of Athletic Bands, concert band, and jazz ensemble at Texas Tech University and the University of Wyoming.  Prior to becoming a professor, he was a public school teacher at Robert E. Lee High school in Midland, Texas.  Mayes is a member of Phi Mu Alpha, Kappa Kappa Psi, Tau Beta Sigma, Texas Music Education Association, Texas Bandmasters Association, and Phi Beta Mu. He has received the Citation of Excellence from Phi Beta Mu for “outstanding contributions to bands and band music.” He was also awarded The Silver Baton Award for “having maintained a record of excellence and continuous quality of service to bands, band members, and instrumental music education.”

Dr. Nicholas Morrison is Professor of Clarinet and Senior Associate Dean of the Caine College of the Arts at Utah State University, where he also serves as music director of the USU Summer Alumni Concert Band. He has appeared as soloist with the Orchestre Philharmonique Ste. Trinité in Haiti, with the Notre Dame, New World, Fry Street, and Arcata String Quartets, and with the Utah Festival Opera Orchestra. He is frequently called upon as an adjudicator, clinician and guest conductor throughout the Intermountain region and has served as chair of the Research Committee and Editorial Board of the College Band Directors National Association. He has performed as clarinetist with the South Bend, Tallahassee, Jacksonville and Utah Symphony Orchestras, the Grand Teton Music Festival and the Utah Festival Opera Orchestra, and is a founding member of Logan Canyon Winds, USU’s faculty wind quintet.  As a member of “AirFare” flute-clarinet duo with flutist Leslie Timmons, he is on the Utah Arts Council’s Artist-in-Education roster and serves on the faculty of the Chapel Hill (NC) Chamber Music Workshop. He has premiered works by Libby Larsen, Valerie Coleman, Jeff Scott, Keith Gates, Dennis Griffin and Philip Parker and currently serves on the board of the Flute-Clarinet Duos Consortium, a group dedicated to the commissioning and presentation of new works for Flute-Clarinet Duo. He is President of the board of the Cache Children’s Choir and board member for community service with the Rotary Club of Logan, Utah. Morrison holds degrees from the University of North Carolina-Chapel Hill, the University of Notre Dame, and Florida State University.

Vince Oliver is a graduate of the Thornton School of Music at the University of Southern California, where he studied percussion performance and composition. Upon graduating he toured as a performer with the cast of the Broadway show Blast! as a featured percussion soloist for two years of a US tour, and six summers in Japan with KTI/MEG productions of Blast! and MIX (Music in Extreme). In 2017, he was the music director and co-arranger for a new Blast! production in Japan featuring Disney music.  As an educator, Vince served as Percussion Director at James Logan High School from 2003-2013. Under his consultation the JLHS Wind Ensembles performed at The Midwest Clinic, Carnegie Hall, The Walt Disney Concert Hall, WASBE, and the Edinburgh Music Festival. Additionally, the marching band won seven consecutive WBA Championships, and the JLHS Percussion Ensembles made several appearances at WGI World Class Finals, earned one WGI silver medal, and won a WGI Championship in 2013. As a composer/arranger, Mr. Oliver has had the privilege of writing for various ensembles throughout the world. His wind ensemble and orchestral compositions have been performed at The Walt Disney Concert Hall, Carnegie Hall, The Kennedy Center, and the Palau de Música in Barcelona. Press, a piece for string orchestra and electronics was premiered at the 2014 Midwest Clinic. He arranges/composes/consults for several marching bands and drum corps across the US and Japan, and is currently the music coordinator and electronics composer/designer for the Bluecoats Drum and Bugle Corps, and the music arranger for the Yokohama Inspires. His early DCI experience includes performing with the Santa Clara Vanguard and Blue Devils Drum and Bugle Corps.

Dave Pickett holds two undergraduate degrees from Western Michigan University with majors in Music and Business Administration. Dave is a former timpanist for the Kalamazoo and Flint Symphonies, and percussionist with the Macomb Symphony. He marched with a DCI finalist drum and bugle corps and has been an active member of The International Percussive Arts Society since 1989. He is recognized internationally as a clinician, adjudicator, teacher and performer of all percussion instruments and musical styles. Dave is a former Assistant Director of Bands at Sterling Heights, MI, Stevenson High School, and the Utica School District, and he currently assists as the staff Percussion Specialist for the Romeo School District, Romeo, MI, the St. Clair Schools in St. Clair, MI, and the New Haven School District in New Haven, MI. Dave has written and instructed the music book, the percussion book and/or designed the drill program for over 135 different high school bands across the US since 1985. In 1999, he created his own business, DPMusic-Total Percussion, where he teaches, writes music, and presents educational and motivational clinics for students and educators of all levels across the US. In 2008, Dave was inducted into “The Guild of Professional Drum Teachers”, and he has been on the education team with Vic Firth Sticks and Mallets Corporation for 21 years. Dave is an inaugural member of the Sabian Cymbal Corporation education team established in 2013. He has performed concerts, clinics and adjudicated music ensembles in over 30 different states and 3 countries, and he has judged visual and music programs for DCI, DCA, WGI, USBands, MAPS, SCPA, RMPA, IPA, TMEA and IHSMA. In addition, Dave has judged for the Michigan Competing Band Association and the Michigan Color Guard Circuit (for both color guard and percussion) for over 25 years. Dave is the Chief Judge for Percussion and Winds for the MCGJA, and has adjudicated WGI Indoor Percussion World Championships for 10 years as a Visual Percussion judge. In 2013 Dave judged Percussion on the field at the Preliminary competition of the Drum Corps Associates, World Championships. His greatest accomplishment is that he is a proud father of 3 wonderful young men who are great musicians, leaders, and wonderful human beings!

Dr. Gary Schallert is Director of Bands and Professor of Music at Western Kentucky University where he administrates the band program, conducts the Wind Ensemble and Symphonic Band, and teaches graduate and undergraduate courses in conducting and music education. Additionally, he supervises instrumental student teachers. Dr. Schallert earned his Bachelor of Music Education and Master of Music degrees from New Mexico State University, and the Doctor of Arts degree in Wind Conducting from the University of Northern Colorado. Schallert maintains an active schedule as a guest conductor and clinician throughout the United States and has conducted touring ensembles in Europe, Australia, and Costa Rica. Under his leadership, the WKU Wind Ensemble performed at the 2012 and 2016 KMEA Conferences and the 2016 CBDNA Southern Division Conference in Charleston, SC. In addition to his work on the concert stage, Dr. Schallert is an active adjudicator for prestigious marching arts events across the country including Drum Corps International. He has contributed Teacher Resources Guides for nine volumes of the popular series Teaching Music Through Performance in Band. Dr. Schallert is a member of the Kentucky Music Educators Association and was recently honored with the 2017 College/University Teacher of the Year Award. Other professional affiliations include the College Band Director’s National Association, the National Association for Music Education, the National Band Association, and the KMEA Third District Band Director Association. He is a member of Phi Beta Mu, Phi Mu Alpha, and is an honorary member of Kappa Kappa Psi and Tau Beta Sigma. He and his wife, Amy, reside in Bowling Green and have four sons; Ryan, Casey, Evan and Trevor. Dr. Schallert marched in the very first New Mexico Pageant of Bands.

Ashleigh Wright began her color guard experience as a performer with the Waterloo West High School color guard in Waterloo, Iowa from 2005-2008 under the direction of William Martin. The summer after her senior year of high school, Ashleigh marched the summer of 2008 with the Phantom Regiment Drum and Bugle Corp. From there Ashleigh has instructed and choreographed for Waterloo West High School, Winterset High School, and Waukee High School color guard programs for marching band and winter guard seasons. Ashleigh has also choreographed for other Iowa schools and has been an instructor for many different Iowa color guard camps around the state. Ashleigh has judged multiple Iowa marching band competitions, along with marching band and winter guard competitions in Missouri. Ashleigh resides in Waukee, Iowa with her husband and is currently working with Waukee’s guard program and teaching kindergarten in the Waukee Community School District. 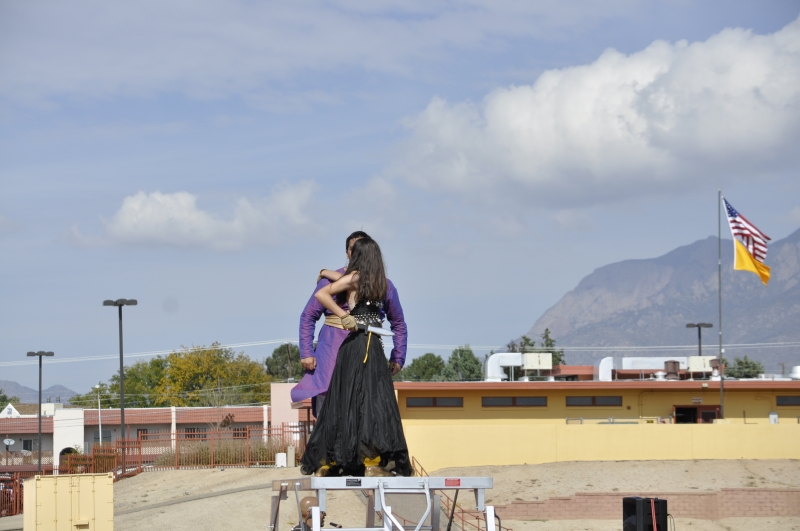 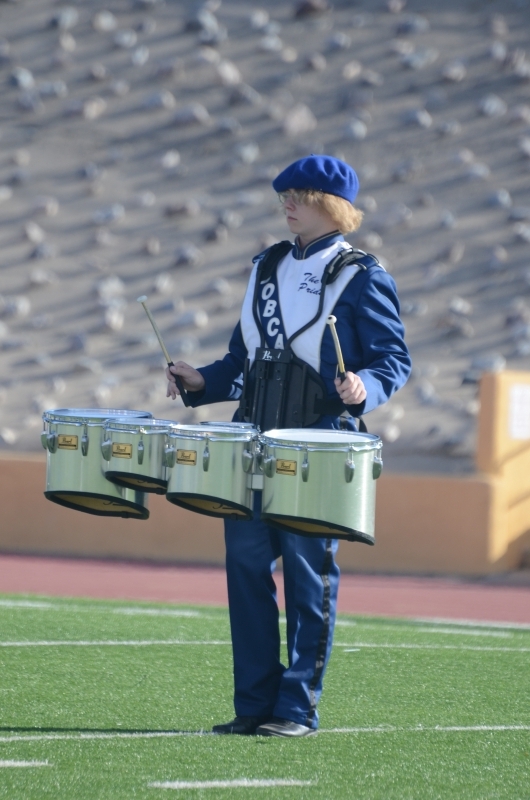 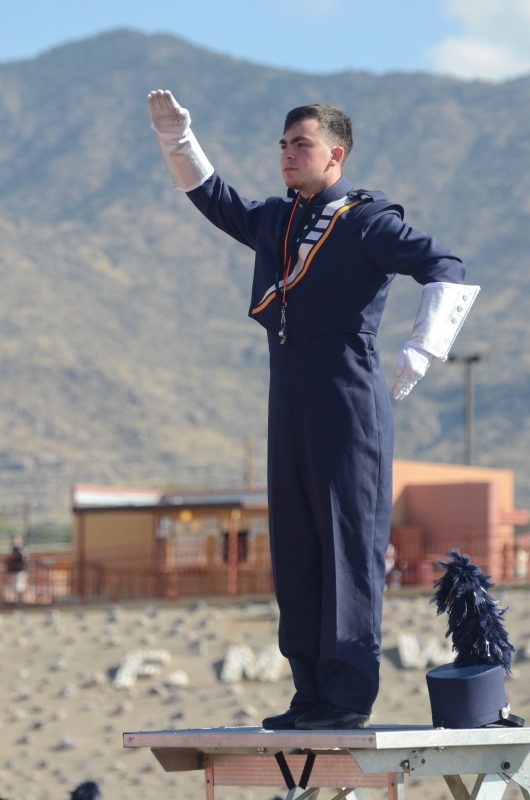 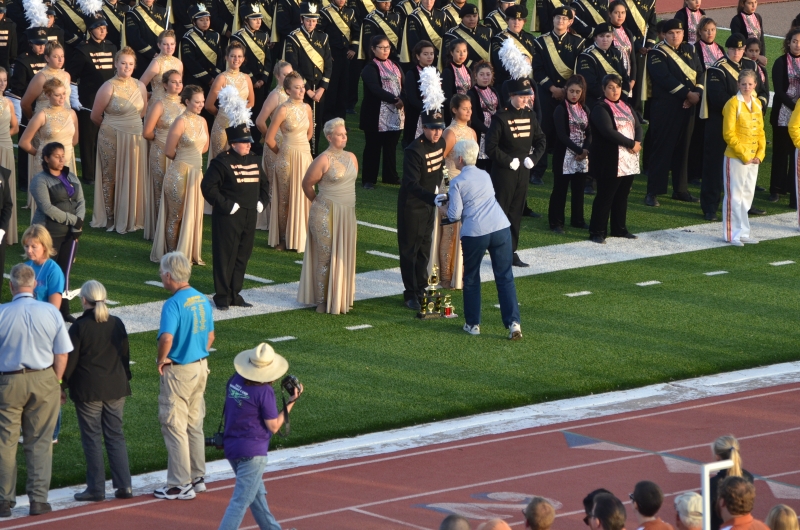 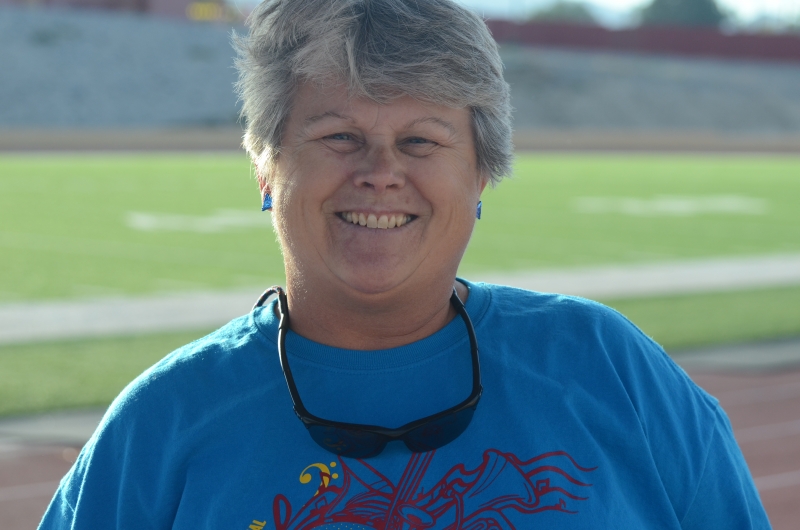 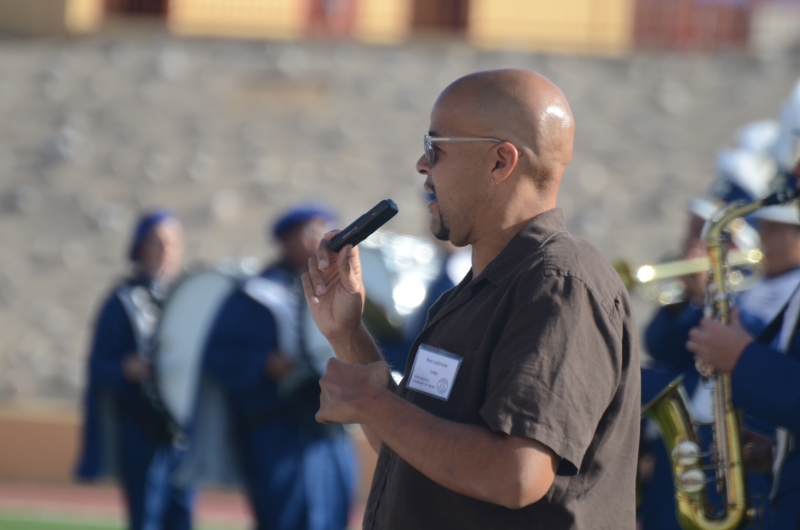 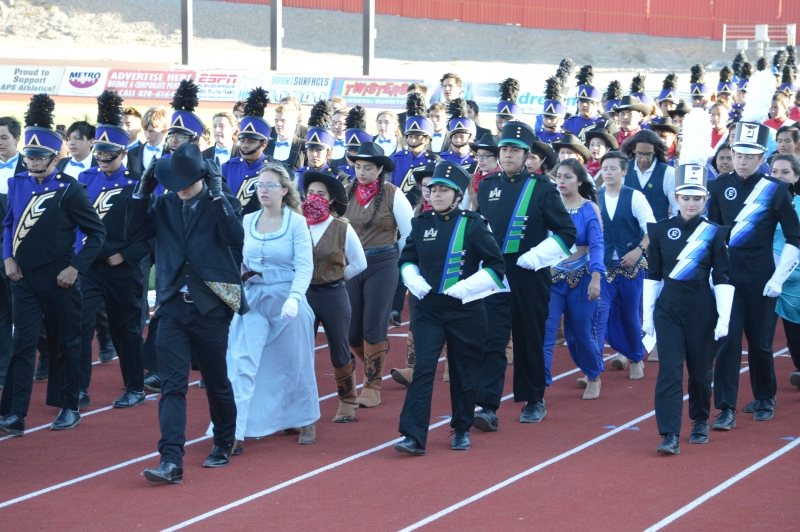 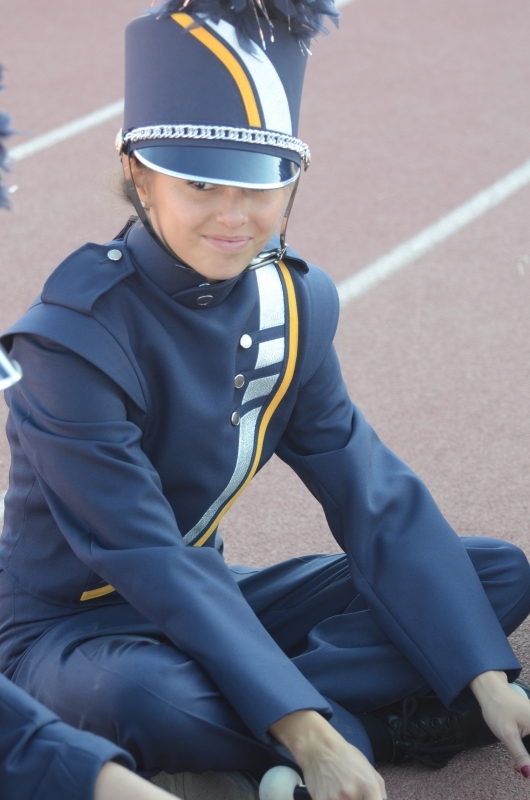 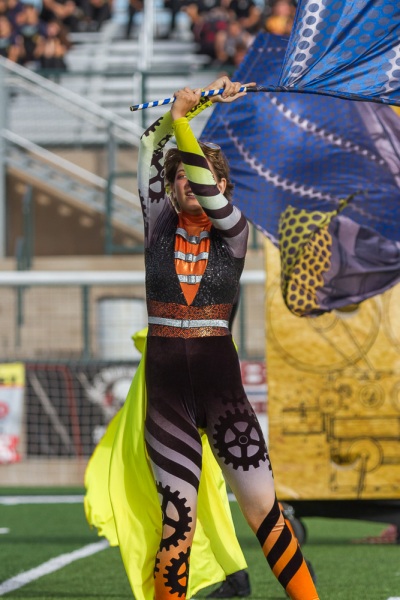 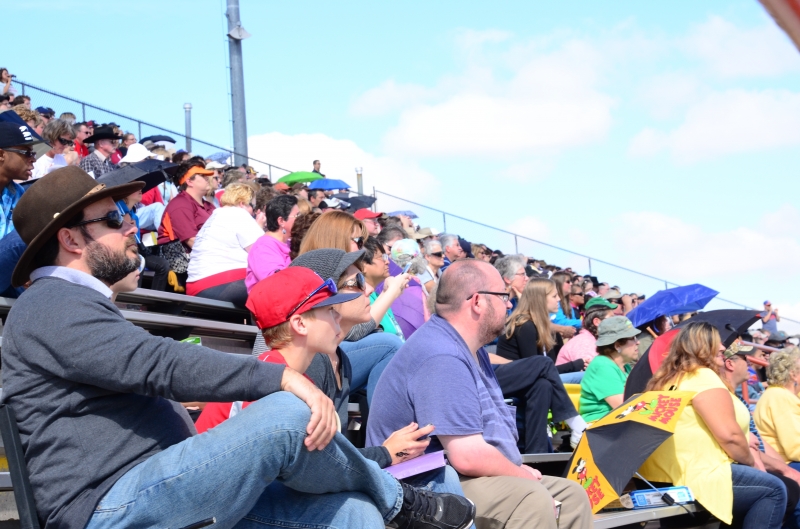 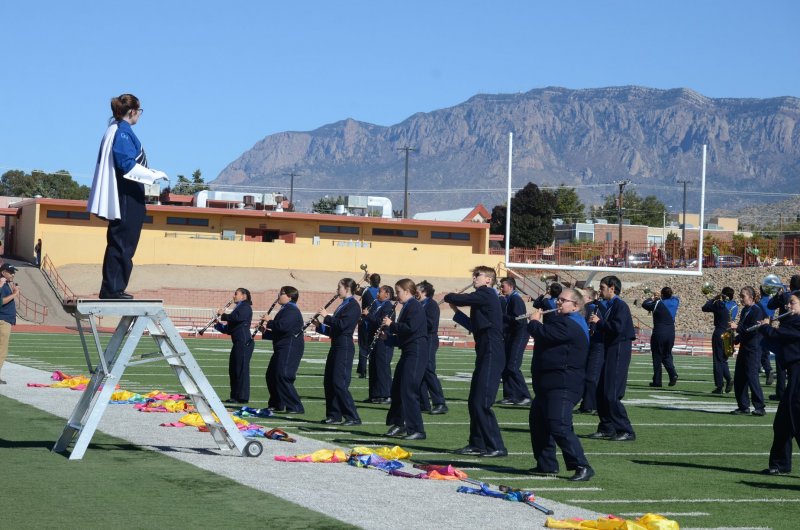 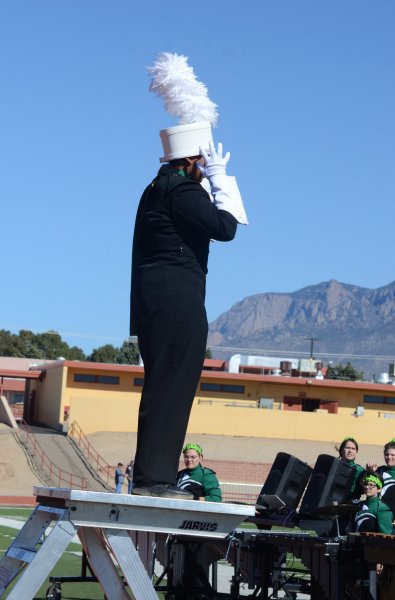 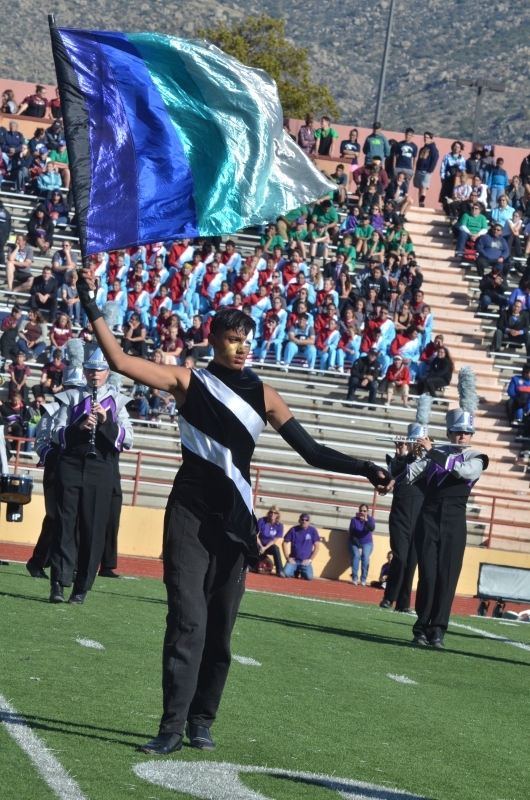 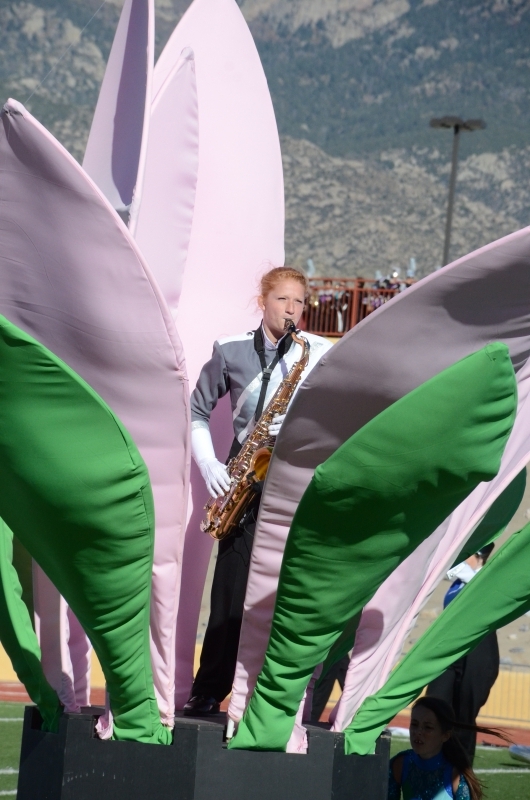 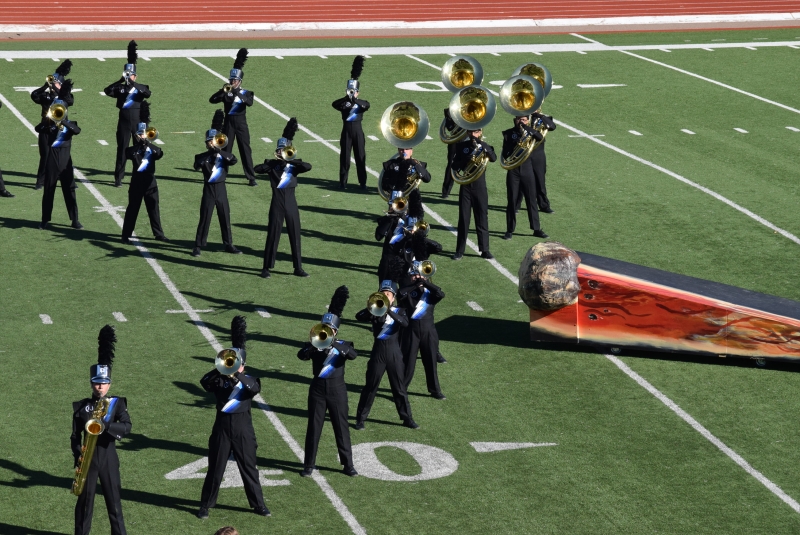